When we last left our intrepid linguist, she had presented you all with a puzzle: Merkredon, vi legos pri konstru lingvoj.

The language is Esperanto, and it means “On Wednesday, you will read about constructed languages.” Congratulations to M.Howalt who correctly identified the language and was able to sort out at least part of the sentence! If anyone else wants to devise some clever Esperanto party tricks, or just mess with people (something Yours Truly would definitely approve of), you can find a translation website here.

I remember first learning about Esperanto as a teenager and thinking how cool it would be if everyone really did learn it. I loved the idea of a tool that would make communication possible with anyone and everyone. As with many other things, however, this was a romanticized idea, though it would take me years to understand why. 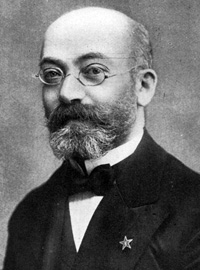 Esperanto was developed in the late 19th century by a Polish ophthalmologist named Ludovic Zamenhof. He first proposed the idea of a constructed, universal language in 1879 and nine years later, he published Esperanto. According to the unlikely source of the Journal of the American Medical Informatics Association, “Zamenhof witnessed firsthand, in his homeland, the often violent struggles between different ethnic groups and concluded that the diversity of languages was the main cause of division in the human family.” Zamenhof believed that a constructed language would have many advantages over an existing human languages in improving communication and avoiding further bloodshed in international relations.

These are all lovely ideas, and for many years, hope remained that Esperanto would fulfill all these promises, despite opposition from Josef Stalin, who called it a revolutionary plot, and Adolf Hitler, who thought it was a tool for Jewish domination. The first Esperanto magazine was published in 1889, and many works of literature and scholarship have been both translated into and written originally in Esperanto. The first World Congress of Esperanto took place in Boulogne-sur-Mer, France in 1905, and have continued to convene each summer since then (this year’s will be in Copenhagen, Denmark). There was a peak of interest in the 1970s, but after that, despite having the greatest success of any constructed language, interest has waned and continues to do so.

Why won’t Esperanto catch on? What are the problems with Zamenhof’s vision? First of all, linguistic diversity is most likely not “the main cause of division in the human family”. We are, for example, perfectly willing to fight and kill people who speak the same language. Also, language differences alone have rarely been the cause of widespread violence. There have been tensions over language divisions, to be sure, but mostly these tensions have been due to one language being suppressed by that of a dominating force or group. Sometimes language can be the trigger for an underlying political, ethnic, or geographical conflict that had been simmering for a long time. However, if the simple existence of language diversity were the cause of conflict, the world would have been a wasteland by now.

A more practical reason why Esperanto, or probably any other constructed language, would not be likely to catch on is that they are too limited. The simplified grammar limits what can be expressed, especially when it comes to words that need to be created for modern advances in technology, science, and business. Words are constantly being added to the English lexicon as we struggle to keep up with the progress of a modern world. Can Esperanto provide for so many neologisms at the same rate as a natural human language can? It seems unlikely.

Additionally, communication is limited to only those who actually speak Esperanto well enough to converse. The numbers vary – some estimates put the number of proficient speakers at 100,000 and some as high as 3 million. Unless there were a massive effort to promote, teach, speak, and write in Esperanto, there will still be only, in essence, a handful of people who could actually use it for any sort of interaction.

This raises an additional question of community, which might be the nail in the linguistic coffin for Esperanto as a universal language. Language doesn’t live in a vacuum; it thrives on a community of speakers who transmit that language to younger generations. What if two people meet at a convention and can only speak to each other in Esperanto? They fall in love, get married, and have children – all the while conversing in Esperanto, making their children native speakers. Will the children speak it the same way as their parents, or will it change? Will it become more complex, more irregular, and more expressive? In other words, will it become just like every other human language that has already organically come into existence, making the whole point of a constructed language moot?

Humans are wired for language, and this implies linguistic complexity and messiness. When exposed to “impoverished” linguistic input, children will accommodate for this by injecting more complexity, by developing more grammatical rules from that impoverished input. This has been seen time and time again when pidgen languages become full creoles, but also more recently, and in more dramatic form, in Nicaraguan Sign Language.

Deaf children in Nicaragua were isolated from each other until the 1980s when the government decided to open a school in Managua. Older students who attended the school could communicate with rudimentary gestures and some basic rules, but their range of expression was severely limited. This is generally what’s called ‘home signing’ – the fundamentals of communication that are developed in the absence of any linguistic input because of isolation and the inability to hear spoken input from the family.

Younger students who were exposed to this system of home signs remarkably began to produce linguistic output that was radically different from the input. It had more rules, variability, expression, and clarity. “With no coexisting signed languages and limited access to Spanish as a result of low literacy and the inability to hear, the only possible source of this highly complex linguistic structure is the human brains of those very young first language learners.” (National Science Foundation) In other words – the children created a new language from the scraps of home signing.

Wouldn’t this happen with Esperanto? Isn’t the simplified grammar a form of impoverished input? And wouldn’t the parents, by definition, be non-native speakers, which means they may be speaking broken Esperanto? There are some people – estimated to be about 1,000 – who have grown up speaking Esperanto, one of the more notable example being George Soros who, incidentally, operates in English. There are already linguists studying whether or not native speakers of Esperanto ‘naturalize’ the grammar and of course, there is already disagreement. Bergen (2001) thinks native speakers are changing the grammar, while Lindstedt (2006) does not (though one wonders about his bias – his test subjects were his own children).

It’s possibly too soon to be sure, especially with such a small pool of potential subjects who don’t interact as a close community, but given the tendency over the past 50,000 years to move towards complex, irregular, and unpredictable, yet infinitely functional language, I don’t hold out hope for global Esperanto.

Now Klingon, on the other hand…