The vocabulary of insanity

The weather is getting warmer and more humid around here, and the colors outside have shifted from countless shades of pale, delicate green into the lush deep greens of the approaching summer. I’ve finally managed to convince myself that my teaching work really is completed for the next two months or so, and this enables me to really sink into the activities I wish I could do all the time, without the distractions of that pesky task of making a living.

Summer is not my favorite season, but it sure can be pretty to look at.

I dusted off my bike and took it out for a long inaugural ride. My closets and file cabinets are getting shorn of unnecessary bulk. My car has been freshly washed and waxed and I’d swear she now preens her way down the highway. I have plans to build some simple, sleek shelves to replace a bulky barrister cabinet that is taking up too much room in my tiny home office. And I will break out the brushes, and bright yellow paint to bring new life to my living room.

And I will read. Oh, will I read! As I mentioned last week, I’ve been making my way through Lolita (made it to page 200 tonight), and it has definitely been a struggle. Nabokov’s style is challenging, partly due to his complex sentence construction, and also to the abundance of more obscure, Latinate vocabulary. I’ve been in the habit of making notes of words that I’d like to look up, but checking the dictionary later so as not to interrupt my reading. I’ve been doing the same with Lolita.

After last week’s post and discussion in comments, however, I decided to interrupt my reading to look up words on the spot. Even though I still understand the flow of the story, perhaps skipping those words for the time being was preventing me from some sort of insight into Humbert’s character that would allow the prose and story to be managed more easily. And because I have the delicious gift of Enough Time to indulge in more intensive word study, I started carrying around my dictionary along with my Nabokov.

It was a revelation! I started to see much more clearly the contrast that Nabokov was setting up between refined Old World Humbert and crude American Dolores, between his erudite vocabulary and his boorish desires and behaviors. Also evident was the inner conflict between Humbert’s monstrous pedophilia and his genuine love for Dolly. He hid behind his cultured persona, both from others and from himself.

Take for example, the following: “I would leave them to their game and look on, comparing their bodies in motion, a silk scarf round my throat; this was in south Arizona, I think – and the days had a lazy lining of warmth, and awkward Lo would slash at the ball and miss it, and curse, and send a simulacrum of a serve into the net, and show the wet glistening young down of her armpit as she brandished her racket in despair…”

A simulacrum is the semblance of something, an imitation, and image. It dates from 1599 and came through Old French from the Latin simulāre (likeness) and similis (similar). Rather than explaining that Lo sent “a weak serve” or maybe “a poor excuse for a serve” or even “a pathetic attempt at a serve”, all of which would have gotten the point across, Humbert, in his silk scarf, uses simulacrum to distract the reader, to remind us that he is educated and civilized. He draws our attention away from what is actually happening: he is keeping an eye on his 12-year-old lover, watching her body, allowing her play tennis in exchange for illicit sexual favors. We wonder about the semblance of innocence, of the image of platonic, fatherly attention Humbert is portraying, and the word choice suddenly takes on new, insidious meaning. 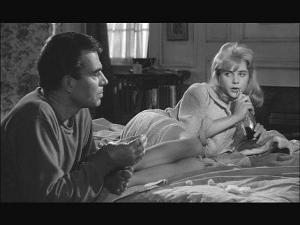 Here is another example: “Eva Rosen, a displaced little person from France, was on the other hand a good example of a not strikingly beautiful child revealing to the perspicacious amateur some of the basic elements of the nymphet charm, such as a perfect pubescent figure and lingering eyes and high cheekbones.”

Perspicacious means very observant, having acute mental perception and awareness. It comes from the Latin perspicere(to look at closely). In our twisted narrator’s mind, he is an amateur at ogling pre-pubescent girls, eyeing them up, identifying them as nymphets. But his choice of perspicacious unwittingly reveals that he’s got a heightened, trained awareness of them, and we suddenly remember his practice of sitting in a park across from a girl’s school and masturbating to the idea of having sex with 11-year-olds. He is also painfully aware that his obsession is wrong, deviant, and illegal, and he constantly strives to hide his urges.

To seal Humbert’s fate, I offer one last example – one that seemed particularly insipid as I checked the word and re-read the passage: “At first she ‘ran a temperature’ in American parlance, and I could not resist the exquisite caloricity of unexpected delights – Venus febriculosa – though it was a very languid Lolita that moaned and coughed and shivered in my embrace.”

This section is disturbing enough, knowing what Humbert is doing to Lolita even though she’s got bronchitis and lying helpless in bed. Then I looked up caloricity, even though I suspected the definition. As I expected, it relates to calories and the generation of heat. It is from the Latin calor for ‘heat’ and came via the French calorique.

The use of the word seems like an unexpectedly clinical treatment of his lust for Lolita, as if it has taken on a life of its own and Lo’s body is simply a tool. He doesn’t even recognize her anymore, but reacts uncontrollably to the simple heat of her body. Heat, of course, is a sexual reference – passion, desire, climax. He calls her his ‘Venus febriculosa’ – his feverish Goddess of Love. The duplicity of the word matches that of Humbert’s actions and motivations. Does he really confuse the fever of illness with the fever, the heat of passion? Is this the lie he knowingly tells himself, or is this the illusion that he truly believes in the midst of his madness? Does he have to remain clinical about his own passion in order to deny its destructiveness for both him and Lolita?

And so, I embark on the last third of my Nabokov adventure with new eyes and a new technique for coping with one of the most difficult books – in more ways than one – that I’ve read in a long time. I suspect as I finally get drawn into the language, I will be on even more of a roller coaster until I finally reach page 317 – dazed and unsettled, but hopefully satisfied.

Edited to add: I’ve recently gotten approval notifications for several comments, all of which suggested in various ways that my ignorance of vocabulary was responsible for my inability to see the sophistication and beauty in the idea of grown men having sex with 12-year-old girls. I smell either trolls or creeps (or one person trying pretend there are more like him); either way, they have no place here. For this reason, comments have been closed on this post.

13 thoughts on “The vocabulary of insanity”