I don’t put a lot of credence into horoscopes or zodiac signs, but it is true that I’m a Pisces and also quite enamored of the water. That’s a good thing, because I spent quite a lot of time in close proximity to water during my two weeks away. I believe I wasn’t within sight of a major body of water for only two out of fourteen days. It was glorious. 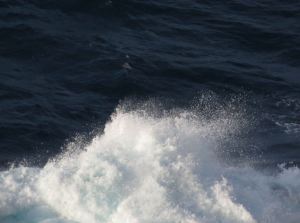 The spray from the crashing waves taunted me and my camera for days.

The first week was spent crossing the Atlantic, which meant I spent most of the time in sight of water exclusively. The ceaseless waves had me hypnotized. I loved smelling the salt in the air, and after a very brief adjustment period, the very gentle rocking of the ship felt soothing and calming. I started to think that I was a sailor in a previous life, or maybe there was something to this astrology business.

Those fanciful thoughts reached their limit, however, when I was trying to find my way around the ship. The ship is enormous and I was not always in sight of the water to be able to tell which direction it was pointed in. If I could see the waves at least, I could tell which way was the front and which way was the buffet. When going back to the cabin, it was worse. Upon reaching the top of the stairs, I would look left and then right but both sides looked the same. I would choose one, walk a few steps down the hallway, and then realize when looking at the cabin numbers that I was on the wrong side.

It should have been a simple matter of just remembering “Turn left at the top of the stairs.” But there was more than one set of stairs. And because I apparently love to make things as complicated as possible for myself, I would occasionally take the elevator, which was opposite the stairway.

My boyfriend, A., who apparently has a compass in his nose and always knows which direction to turn, tried to be helpful.

“Just turn towards starboard and then we walk aft.”

The key word here would be tried. The fact that these instructions were singularly unhelpful doesn’t make me love him any less. But it did result in me giving him the stinkeye.

I understand perfectly well why sailors need clear, unambiguous references to the different sides of the ship. It prevents an emergency from becoming a disaster: “There’s a huge leak on the right side of the boat!” “Wait, is that your right or my right?”

Would I be lounging on the port or starboard side today?

What I did not understand was a) why I, not a sailor, had to use the words on a regular Tuesday afternoon when there was no emergency, and b) why the terms were what they were. I mean forward (or fore) seems intuitive enough: it’s the front of the boat and you have to move forward to get there. But aft? Port? Starboard? Where did those nutty sailors get these terms anyway? And more importantly, how could I get my boyfriend to just say ‘left’ or ‘right’?

I was pleased to learn that there is much more of a logic to these terms than one might think when giddy from too much free food and lack of teaching responsibilities. I was even more pleased that the explanations involved in the irresistibly cool Anglo-Saxon and Nordic languages. So many diphthongs and y’s…a girl could swoon! I could finally separate in my head the terms for the areas of the ship and the adjectives that describe those areas.

Bow. The bow is the front of the boat, and the word forward (fore)  is the adjective to describe something that is positioned or moving towards the bow. The word bow is thought to have come, via several incarnations, from the Old Norse (also called Old Icelandic) word bóg-r, meaning ‘shoulder’ or ‘bough of a tree’. From the OED: “Bow is thus in origin the same world as BOUGH, but while the latter has come down direct from OE in one of the OE. senses, bow has been adopted at a later time from LG. [Low German], Du. [Dutch] or Da. [Danish] in the special sense of the ‘shoulders’ of a boat or ship, developed in the maritime speech of one or other of these, but not known to OE. or ME. Bough and bow have thus widely diverged, the earlier meaning of ‘shoulder, arm’ not being retained by either. (Not related to BOW sb.1 nor to BOW v.1 though probably now associated with the latter in the popular etymological consciousness, as appears from most attempts to explain it.]” 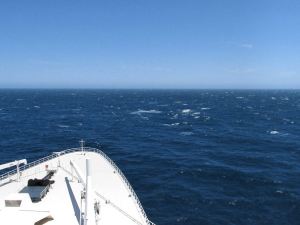 The bow. And a LOT of water.

This definition was particularly interesting, given the diversion of the original word into bow and bough, neither of which mean ‘shoulder’ but both having meanings that clearly relate to ‘shoulder’. I also felt compelled to include the note at the end, not only  because it contains valuable information to correct misconceptions, but it’s also so deliciously snarky. How can you not love a snarky dictionary?

Stern. This describes the back of the boat and dates from the 14th century. It comes again from Old Norse, from the word stiórn, meaning ‘steering’. Okay, now we’re talking! This is all starting to make more sense. The back of the boat is the location of the rudder, which of course steers the ship. I have always known where the rudder is, but not knowing the connection between the word ‘steer’ and ‘stern’, it was difficult for me to remember what the back area of the boat would be called.

The beginnings of the sunset from the stern. Hey, another s-word connection to help me remember!

Aft. At long last, I can remember the difference between stern and aft. Now that I have the connection between the s-word (stern and steer), I’ll remember that aft is the adjective (a-ha! The a-word connection!) to describe the back area of the boat. Aft, in the nautical sense, has been around since the 17th century. Again, the OED explains the etymology clearly, sneaking in some extra information: “[As usual with nautical terms, the early history is lost; but comparison with the derived baft…show it to be the OE. [Old English] æftan, cognate with Goth. aftana, from afta behind.” The description goes on to explain how it originally was a superlative in Greek, which left me a bit stunned, really. It never ceases to amaze me, the journey that some words take, and how far away they sometimes travel from their humble beginnings.

Port and Starboard. These two words worried me at first. I could not keep them straight and for some reason, I had a hard time coming up with a snazzy little mnemonic to help me remember. I asked A. how he remembered them. This time, there was no pretense of being helpful: “I don’t know. I just do.”

Originally larboard was used to describe the opposite of starboard but because the words sounded so similar to each other, a different term was needed. Since the rudder was on the right side, ships would dock and unload from the left side, and so the word port came to mean the left side of the boat starting in the 17th century. The logic of this seems so clear that the term itself is stuck in my head. And if that weren’t enough, both ‘port’ and ‘left’ have four letters each. 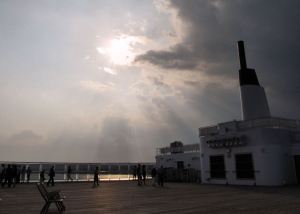 Anyone who's been a sailor in a former life and is worth her sea salt would know that the midship is in the middle. Duh.

It’s nice to know that I can now rest easy, knowing that if I should find myself in a nautical emergency, I would know exactly which way to run. This is assuming that I still have a chance to run after working through my thought process: “Everyone head aft to the starboard side? Okay, aft…aft…that’s like after, which is kinda sorta like behind and that’s in the back…Got it, so I go to the back. Starboard…wait, I have this…it’s the steering side…uh…stern…rudder…Oh yeah, the right! Okay, now which way is right? Wait, why am I getting wet?” Hrm…I might have to practice this a bit more.