It’s been all over the news: the death of controversial, feared, despised, admired Libyan leader Mum…Muam…Moamm…

Crap. Just how the heck to you spell that guy’s name? According to one article I read many moons ago, there have been a recorded 112 different ways his name has been spelled. And that’s apparently not the only strange thing about him.

How about I just refer to him as Gene for the moment until we get this sorted out, eh? 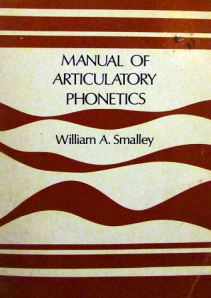 The book that started it all...

There is a reasonable explanation for the confusion. Gene’s language is Arabic, and as we know, Arabic is written using a different script than the one I am writing this post in now. But as this article explains clearly and with fancy scripts that I can’t manage, the writing system is only one reason why we have trouble spelling the name.

The truth is, we would have problems pronouncing the name as well because Gene’s last name contains two sounds that we don’t have in English. And to make matters more confusing, the Libyan dialect pronounces one of these sounds slightly differently than other Arabic dialects would.

The first sound in the last name is often transcribed as a “q” and is roughly equivalent to our /k/ sound, but made much farther back in the mouth, almost in the throat. It’s one of the sounds that creates the almost guttural quality of Arabic. My favorite description of how to pronounce the Arabic /q/ comes from my old Manual of Articulatory Phonetics by William A. Smalley. This was the textbook for the second linguistics class I ever took, which was the course largely responsible for me getting hooked on the subject. 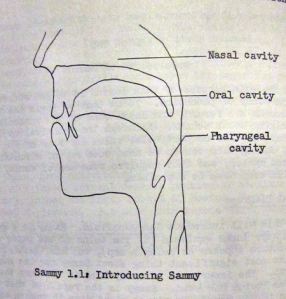 Sammy was the cross-section diagram we would use to draw sounds. My professor being a first-wave feminist, we renamed her Sally.

The book tells you to pronounce a /k/ and hold your mouth and throat in that position. Then, stick a pencil into your mouth and push the back of your tongue further back. If you haven’t gagged up half the bile in your liver by now, you’ve just pronounced a backed velar voiceless stop, otherwise known as a glottalized velar plosive, or the qoph in Arabic.

That is how Gene’s last name begins. I imagine it would be awkward to push a pencil onto the back of your tongue every time you mention his name, so you might want to practice until you can make the sound without the pencil.

You should feel lucky. This isn’t nearly as hard as tilting your head back as you push down the back of your throat with a spoon while massaging your larynx and saying “ah!”, as Smalley instructs you to do in order to learn how to produce pharyngeal vowels. 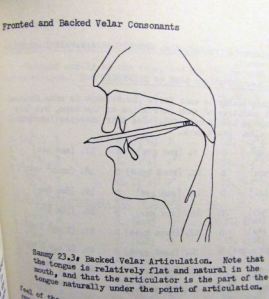 Don't take that pencil out just yet!

But wait! I spoke too soon. There is still the matter of the second sound in Gene’s name that is unknown in English, and that is the second consonant that is often represented by a “d” or “dd” in English. However, it’s not really a /d/ in Arabic. It’s closer to a /th/ (as in ‘these’) but it’s also pronounced with the back of the mouth opened further, with more of a throaty quality. It is, in fact, a pharyngealised voiced interdental fricative.

Let’s just say that it’s tricky. You’ll be needing that pencil back. Both sounds may activate most English-speakers’ gag reflexes for a day or two before we finally got used to them, but it just takes a little practice and you’ll be weaning yourself off that pencil in no time!

This book was hardcore and as low-tech as it gets. I still love it.

Back to the spelling issue. Because the qoph is not exactly a /k/, the Ka- start to Gene’s last name is slightly off the mark. Qa- is more accurate. As mentioned above, however, the Libyan accent gives a bit more voice to the qoph, making it sound almost like a /g/ rather than a /k/, and resulting in the Ga- spelling variation. But dialectal variation doesn’t have to be reflected in spelling. After all, just because it’s pronounced ‘chowdah’ in New England doesn’t mean that everyone has to start spelling it that way!

The /th/ sound has been written as a “d” or “dd”, but this not only puts the articulation of the sound too far forward in the mouth, but it also incorrectly changes the quality of the sound to a stop instead of a fricative (The difference is that a stop consonant will do just that – stop the air. A fricative lets the air out, but just a little at a time. Think of the word friction.) In the “dh” combination, the “h” represents the throatiness and friction of the sound, therefore making it distinct from a /d/.

What all this means is that the most standardized spelling of the name is probably ‘Quadhafi’. I still haven’t found enough information about his first name and its proper spelling, but vowels can be a big, amorphous mess and he’s mostly known to the world by his surname anyway, so I’d say my work here is done!