I started my blog in June 2009 but I only paid sporadic attention to it until February 2011 when I really started writing. Slowly but surely, the total number of posts crept up until I found myself with just a handful to go before I hit 100.  I wanted to do something special.

The first thing I did was to make an honest blogger out of myself: I lopped off the ‘wordpress’ from my web address and officially became asalinguist.com. Huzzah!

Papa and me, dancing at my brother's wedding.

The second thing I did was to decide what to write about. I’ve mentioned my father previously, (here and here) which may make one conclude that I was somewhat of a Daddy’s girl. It’s a fair assessment. I am the youngest of five children – four sisters and one brother – and while my brother retains the title of Most Pampered (the only son of Portuguese parents), I came in a close second. Not only had my four older siblings broken my parents in for me, but my father was already 54 when I was born. Nice and mellow … no, not mellow. My father, Pedro, was stubborn, curious, mischievous, short-tempered, even laid-back about certain things, but not mellow. Still, his age must have softened him a bit, made it easier for him to be a little more playful and lenient with me than he’d been with my older sisters.

My status as a Daddy’s girl notwithstanding, I also chose to write about him because I write about language and he was a polyglot. Growing up with two parents who didn’t speak English natively certainly had an influence, but my mother’s English was so much more fluent and accurate that we sometimes forgot that she had to learn it as an adult. My father, however, learned it later and never as completely as my mother, and his other languages always played a larger role in his communication, and thus, his identity. I can’t write about language without addressing this early, critical influence in my life.

We were never quite sure of too many details of his past since both of my parents seemed reluctant to divulge them. For a while we thought they might be spies. That certainly would have made life more exciting. I even remember finding my mother’s Resident Alien card one day and wondering if it was some sort of code name or secret spy card. Imagine my disappointment when I learned about immigration statuses in school.

Still, I managed to cobble together some facts. Born in Portugal, my father spent most of his childhood traveling in Europe with his father, who might have been a salesman. His mother had died when he was still a baby.

My parakeet Macoco loved landing on the comb-over. He always got a kick out of that bird.

My grandfather spent a lot of his time in France and Italy, so as a teenager, my father knew French and Italian almost better than he knew his native Portuguese. In the late 30s, his father sent him back to Portugal from Paris where they had been living. Trouble was brewing with Germany and my grandfather wanted him out of harm’s way. He never saw his father again.

Unfortunately, trouble found him anyway as he tried to make his way across Spain, which was embarking on a civil war. My father was detained for several months in a prison camp. We never learned who captured him or why, but my mother did tell us of how he eventually gained his release by learning Spanish and repairing bicycles for the guards, thus getting on their good side.

And so the language count rose to four.

He returned to Portugal, a young man on his own, talented and skilled in mechanics and languages. He opened a garage in a town called São Romão in the mountains of the Serra da Estrela. When I visited the town a few years ago, I tried to look for the red doors of his old shop. They’d still been there in the late 80s, even though he’d left Portugal 30 years earlier.  I saw a lot of red doors. I still don’t know if I found the right ones.

In the 50s, he moved north and became friends with my uncle. He met my mother and they fell in love. It was, in fact, a bit of a scandal since he was 20 years her elder and had already been divorced. Still, they planned to marry, but first, he was going to go to America for a few months to earn some money. He’d heard great things of New York from his friend and he wanted to try his hand at it.

A copy of his first passport photo that I keep in my wallet.

Not realizing that he and my mother would eventually settle in New York for good, he started to learn some English. Proper English. He bought some records. From England. As the story goes, he landed in New York and tried to get a job. He couldn’t understand a single word of New York English that anyone was saying. He decided to go to Montreal instead, where there were still jobs to be had and where they spoke French, as he did. In his words:

“So I go to Montreal, but they don’t know how to speak French! Those Canadians? I understand less what they say than the sacanas in New York! So I go back to New York and suddenly, I know what everybody says. And so I stay here.”

A sacana is a bastard. This is why I know my Portuguese curse words. They’re the ones that always snuck into my father’s English. Other words and phrases made appearances, but none as reliably as the words that offered him the greatest emotional discharge and satisfaction. Among his favorites were Com raio! and Raios te parte! which mean ‘With lightning!’ and ‘May lightning strike you in half!’. He was big on the lightning. Even his favorite interjection was vaguely lightning-esque: “If that idiota comes here again, Zas! I’ll punch his face! You know, like when I used to play the box.”

The Italian showed up when he was in a good mood. He used to sing in Italian when he was happy. “A quindici anni, quando fumai la prima volta mi ubriacai…Fumar la pipa no è peccato l’ha detto Bortolo che me l’ha dato…” He followed that with a series of nonsense words, sung quickly and loudly and finished with a loud “Ahhhhh!”

They were so romantic, those Italian words, that lovely tune. Was it a love song? Was it a tribute to a town or a person? Was it an ode to a sunny day? Many years later, I found out that the song was about smoking for the first time, getting drunk, and then smoking “with zeal”.

I didn’t care. I still love the song.

Couldn't really blame the man for trying to hide from us lunatics.

When he wasn’t singing in Italian, telling time in French, or cursing in Portuguese, my father was doing a decent job at mangling the English language to his purposes and to his foreign pronunciation. In one oft-repeated story, my parents were visiting me in Florida when my windshield cracked. Of course my father wanted to fix it himself but couldn’t without his tools, so he settled for watching as someone else fixed it. I made an appointment at a garage. We drove up and a mechanic approached us. He told us, in a very thick Southern accent, to pull all the way up to the building.

“What he say?” said my father. I translated. From Southern English to Portuguese English. My father asked the mechanic something about the timing or the equipment.

“Huh?” said the mechanic. I translated. From Portuguese English to Southern English. And so it continued for the following hour until my windshield was done.

Sometimes it was the sounds or spelling of English that confounded him. “Why there is an L in would, could, and should if I don’t say them? I don’t believe! You have to say the L! Caramba!” Other times the stress threw him off. “He has a bad chaRACter. I don’t like him.” or “My son learns enGINeering.” He also insisted on giving our regular past tense /ed/ its full respect by pronouncing it as an extra syllable. “I walk-ed in the whole store and couLd not find your mother. You go.”

That’s how we always ended the round of teasing that invariably happened at family occasions. We sat around the big dining room table, all seven of us, for birthdays, Thanksgiving, Christmas, and Easter. We were loud, chaotic, and quite frankly, obnoxious. We are a family of teasers. If we weren’t trying to sneak food onto each other’s plates, we were making fun of someone’s chewing or latest haircut, or playing “Look!” (fyi – chew a mouthful of food, then say “look!” and open your mouth wide when someone glances your way). And then it was my father’s turn. He would just nod his head and smirk.

In later years, he not only continued to mix his languages, but it seemed to happen more often. We didn’t notice too much because he’d always done it and we always understood him, even if none of our friends ever did. He seemed perfectly content to continue communicating in his five-in-one language. If he forgot an English word, he’d just use a French or Spanish one. This bought us more time. 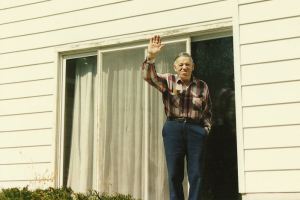 Always a ham for the camera.

Slowly, however, he began to have more trouble remembering words in any language. He struggled and became frustrated. He spoke less. He whistled but didn’t sing. Eventually, all his words were stolen as the Alzheimer’s erased them from his memory.

My father died five years ago today. He was 90 years old. I didn’t plan my 100th post to come on this anniversary, but in the last couple of weeks, it became apparent that the two events would coincide, and I thought it was fitting.

And so today, I dedicate my words to Pedro Rodrigues, polyglot. Que Deus o abenςoe.