‘Tis the season to be punchy…

When I was in graduate school at the University of Pittsburgh, I had quite a few classes in the building that we called Forbes Quad (it was renamed to Posvar Hall in 1999). It was built alongside of the former Forbes Field, home of the Pittsburgh Pirates – among other teams – from 1909 to 1971. Parts of the original ballpark are preserved in various spots, either on their original spots, or close by. Home plate is preserved in the floor of Forbes Quad, and I walked by it – or over it – many times over the course of four years.

Another part of Forbes Field that was preserved was a daily ritual of a group of friends who used to enjoy baseball games at the ballpark. Each day around lunchtime, anyone going through Forbes Quad would hear the sound of Italian being spoken from a group of men sitting on some benches near the entrance. 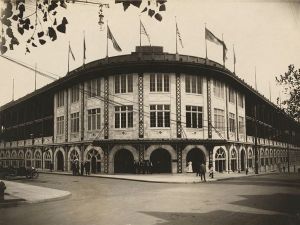 They were adorable. One of my favorite things in the world is a little old European man, and here were anywhere from three to eight of them, all on the better side of 65. Whenever I was in the building during their chat sessions, I would slow my step to be able to hear them longer. I didn’t understand what they were saying apart from a word here or there, but I loved listening to the cadences and beautiful sounds of their words.

The funny thing about them is that sometimes they would speak English, but it sounded almost the same as when they were speaking in Italian. Theirs was not the vague Foreign Accent of Indeterminate Origin often employed in random films noirs of the 40s to add an international air of mystery. Their heritage was loud and clear.

There’s really no mistaking an Italian accent in English.

Don’t believe me? Give it a try. You too can speak with an Italian accent. Just read the following out loud:

This was written by Bob Belviso, about whom little seems to be known. I originally saw this story in Steven Pinker’s The Language Instinct (on page 169 of this scanned copy). I was looking through my files to find some fun exercises to do on the last day of classes next week, and I came across a copy I’d made of this years ago and thought it was fun enough to share.

You can see more of Belviso’s fairy tale versions here.

Who can tell me the name of this story?