Saturday night’s all right for tweeting.

To sneeze. Ah, to sneeze, perchance to breathe…through both nostrils.

We can be such geeks sometimes.

Sneezing has been around for as long as noses have been, and the word ‘sneeze’ has been part of the English language for centuries. It came to us so long ago that its roots are in the so-old-that-it-is-merely-conjectural Proto-Germanic, in which the root is said to have been *fneu-s-.

Sneezing – quite a lot of it – is what I was doing last weekend, as well as sniffling, wheezing, and crying when the sneezes faked me out and mocked me on their way back into my sinuses.

Oh, I live a wild, wild life, my friends.

Something good did come out of my lovely little stint in sick bay. On Sunday night, still relegated to the couch, surrounded by tissues and half-drunken cups of tea, I was catching up on some grading for my summer class. After a long stretch, I needed a break and hopped on Twitter. There, I found I was just 2-3 minutes away from a “101 Troublesome Words” Twitter party hosted by Grammar Girl. I figured I was ready for a good discussion about troublesome words, so I decided to join the party.

It turns out that it was a book giveaway in the form of a Q&A session. It took me a while to get acclimated to how it worked, and then the fun began. There were some very interesting questions. Things were going pretty fast, though, and I realized I didn’t have too much time to really think about my answers.

Since then, I’ve mostly recovered and resumed my normal activities, but the questions are still in my mind. Now that I’ve had more of a chance to think, I’ll offer my answers to five of the questions, in no particular order and in more than 140 characters.

What language rule are you most surprised that people don’t know? I’ve spent the past 15 years dealing with broken grammar rules, and so it’s hard to be surprised anymore. I didn’t think it would be fair to include non-native speaker examples in this question because there are so many reasons why some rules may be harder than others to learn and remember. I may get a little confused at why so many students from so many language backgrounds seem to always want to say “I am agree” instead of “I agree”, but it still doesn’t necessarily surprise me.

There is one thing, however, that almost makes me do a double-take each time I hear it from a native speaker. In fact, I included it in my discussion about my #1 Bête Noire.

Here it is: When using the past conditional, the correct form would be to use the conditional in the main clause, and the past perfect tense in the dependent “if” clause. For example, “If I hadn’t joined this Twitter discussion, I never would have thought about this question.”

The mistake that I hear that surprises me is not the typical would of mistake that I see in a lot of student writing. It’s actually a mistake that I’ve heard many people make, even journalists who should presumably know better. These people break the rules by using the conditional form in both clauses: “If I would have known you were coming, I would have made a cake.”

I’m not sure if it’s an aversion to saying had had (even the grammar check thinks it’s a mistake!) or if people just really don’t know the rule, but it both surprises me and makes my eye twitch just a little bit each time I hear it. 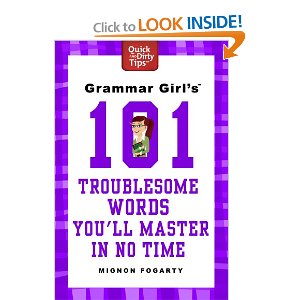 Here’s the book that was up for grabs.

For the most part, I think that people do know the rule if pressed and could avoid the mistake if they paid attention.

Ah, the key words: if they paid attention. They don’t. A lot of people don’t. Part of it could be that they consider it to be such an insignificant detail that it’s not worth the effort of checking. I’ve heard this argument from students. “If you know what I’m talking about, what difference does it make?” My answer to this is to remind them that the apostrophe in this case may not cause tremendous troubles in comprehension, but it is distracting, which makes it harder for the reader to follow the writer’s train of thought. And the burden of making his or her point clearly is on the writer, not on the reader. Besides, if the writer can’t be bothered to check the details, that usually indicates sloppiness elsewhere, and that results in a lack of effective writing.

I do feel that some of these types of mistakes are increasingly the result of our reliance on the auto correcting functions of whatever word processing program we are using. Microsoft Word is the first program implicated in my accusation, but it’s not the only one. We are so used to it correcting ‘teh’ to ‘the’ or ‘recieve’ to ‘receive’ that we barely check our own work anymore. I think this may account for a lot of the silly mistakes I see in student writing, including the mistake that far too many of them make: not capitalizing their own names!

What’s your favorite language joke from a TV show or movie? Whenever I see a joke even remotely related to language or linguistics, I totally geek out. Of course, uncooperative sinuses made the geeking out a bit slow, so it was hard to pick one.

The first joke that came into my fuzzy mind was from “Friends” (The One With All The Cheesecake). Monica finds out from Ross that she was not invited to their cousin’s wedding. She tells him that she wants to be his date. Turns out, however, that he already has a date: “Joan Tedeski, my date. She’s an assistant professor in the Linguistics department. Tall, very beautiful, and despite what some people say, not broad backed!” Monica insists that he take her, not Joan. Ross replies with, “Did you not hear me?! She’s an assistant professor in the Linguistics department, okay? They’re wild!”

That’s a good one, to be sure, but it took a few more minutes to remember the winning scene that should have been my answer. Three words for you, folks: Romans Go Home!

What rule do you find yourself looking up over and over again? For the life of me, I can’t remember all the forms of the verbs lie and lay. It actually got a lot easier after I had to teach irregular verbs as an ESL teacher, but these two verbs still confound me. I really need to make up a rhyme or pithy little saying to remember. This shouldn’t be a problem, but I just haven’t gotten around to it. I have been using odd little mnemonics for years, some of which still rattle about in my brain.

For example, here’s something I remember from my one semester of Latin 20 years ago:   -es, -um, -ibus, -es, -ibus. These are the plural endings for either a declension of a class of noun or a conjugation of a class of verb. In other words, I can’t remember what they’re for, but I’ll never forget the endings. Here is my trick: the endings -es reminded me of the phrase ‘it is’ in Portuguese, and it also sounded similar to the demonstrative pronoun ‘this’. The -um is an indefinite article in Portuguese. Of course, -ibus reminded me of the English word ‘bus’, so I came up with the sentence, “It’s a bus, this bus!”

I’m positive that you are simply dazzled right about now at the sophistication of the way my mind works, aren’t you?

What’s the funniest typo you’ve made or seen someone else make? Where, oh where do I start? Oh, how about with these?

Not even the folks at Cunard are immune from Typo Fever.

And so…the questions and answers continued and more books were given away. At the end of the hour came the final opportunity to win a book. The 20th person to retweet this won the book:

If grammarians had their own flashy, trashy magazine, would it look like this? quickanddirtytips.com/staticcontent/… #troublesome

I hit the retweet button and then, not really believing it would make a difference, I waited about five seconds before hitting ‘Enter.’ What the hell, right? I went back to trying to follow the flurry of late responses to earlier questions.

And then this happened:

For realz? I never win anything :) Thanks! RT @GrammarGirl: @asalinguist wins the 10th and final signed book. Congratulations! #troublesome

(Yes, I was using ‘realz’ playfully; it is not part of my usual repertoire.)

And that’s how being sick and geeky won me a free book!

What was the best thing you ever won?

14 thoughts on “Saturday night’s all right for tweeting.”