Serious enough for a portmanteau.

Things are going to get a little crazy around here. I think I’m ready, though. 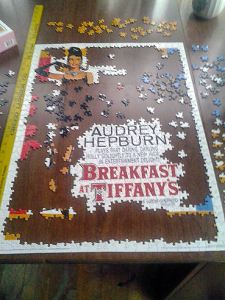 I can also finish my puzzle. Actually, this was taken a few days ago. Audrey is already done. I’ll post a new picture when it’s complete.

Okay, folks. I think I’m ready for the storm. School has been cancelled for the next two days, so I might have a chance to come up from under my 50+ essays per week and breathe. And by ‘breathe,’ I actually mean ‘finally get some of my own reading and writing done!’ I won’t have any outside obligations beyond just riding out the storm.

Or, should I say, the Frankenstorm?

Last year – to the day, in fact – we had Snowzilla. Now we have a possible freak combination of a hurricane and a cold front – thus, Frankenstorm. What is the deal with our compulsion to give cute nicknames to forces of nature?

English has a long history of, shall we say, smooshing our words together. They’re called portmanteaus (or, the more proper plural, portmanteaux.) We take the beginning part of one word (or occasionally the entire word) and merge it with the end part of another, and in doing so, we create new hybrid words and concepts. They’re like the mules of language – part horse, part donkey, and stubbornly persistent.

Some of the more famous portmanteaus?

We’ve all heard these words, but some might not know that they originated from two existing words. Here’s a few that surprised me:

Portmanteaus are a fascinating chronicle of pop culture, as many of them are created to suit new fads and fashions, changing sensibilities, and apparently, acts of nature. Consider the following:

Zelda remains unconcerned about the weather or possible outages.

These words are so often linked to the culture of a time and a place. Since Brad and Angelina are still together, we still know who Brangelina refers to, but how long will it be until we forget TomKat or Bennifer? Could you imagine past famous Hollywood couples getting the portmanteau treatment? Liz Tayler and Richard Burton: Lizard?

Some fads are so short-lived that their portmanteaus never even have a chance to catch on. Either that, or the new word is so clumsy that no one wants to be uncool enough to use it. Ever hear of clopen? That’s closed+open. I’m not even sure what could even be considered clopen.

How about foon? A fork merged with a spoon. Poor foon lost out to spork in the Great Portmanteau Massacre of 1985.

And who doesn’t love brunch, a combination of breakfast and lunch? Unfortunately, its slow country cousins, linner (lunch+dinner) and lupper (lunch+supper) never enjoyed the same popularity and they are now languishing, begging charity in back alleys and hopping freight trains, always searching for the regional dialect that might take them in and give them shelter from obscurity.

This brings us back to dear old Frankenstorm that will be making its fierce appearance in less than 24 hours, and is already, it seems, causing a ‘frankenmess’ for airline travelers. It may be named after a horrific monster made out of corpse parts, animated with tremendous electrical power, but I sincerely hope it also has the gentle heart of a creature that has become self-aware, who wants to spare people the fear that its hideous appearance inspires.

A girl can hope, right? But as the saying goes, I’m probably better off expecting the worst.

To all of us in Sandy’s path: fingers crossed, y’all! Stay safe and dry!

Edited to add: Of course I didn’t remember this until after I posted, but here’s a great post on portmanteaus by Stan Carey on the Macmillan Dictionary Blog. He does a better job at explaining a portmanteau than I do. But my post has cats! Does that count?

11 thoughts on “Serious enough for a portmanteau.”