Though I’m technically still on summer break from teaching duties, it’s definitely time to start gearing up for the semester and plan my courses. However, I’ve been having a hard time transitioning my ‘summer brain’ back into activity, and so I decided to throw down a gauntlet at my own feet. 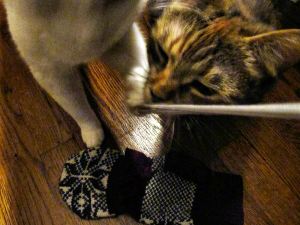 They are completely ignoring my gauntlet! What's so interesting about a camera strap, anyway?

This is a post that I originally published on 26 January 2010. It’s a piece about how learning other languages may or may not have influenced the way I think. As I was writing, I realized that it was growing beyond the confines of a single post, so I published when I’d gotten to what felt like a natural stopping point. I finished relating my experiences with languages and left off when I started exploring the question of their influence on my thought.

As you can see, that was a year-and-a-half ago. The second part of this post has been languishing as I was researching and getting distracted by the thousand other topics I’d love to write about, not to mention being occupied with teaching and, you know, general living. This then will be the challenge I give to myself this week: finish Part Deux!

So here’s ‘le premier part’ once more to get things rolling (I’ve made a few minor edits and added some pictures.) And then, finally, we’ll get to the long overdue sequel by the end of this week. Hopefully after meeting this challenge, the mental transition will be complete and I will have awakened my brain from its estival hibernation. END_OF_DOCUMENT_TOKEN_TO_BE_REPLACED

As many women grow older, they fear becoming their mothers. They see it in little things they say or in mannerisms they have seemed to pick up without noticing. It sneaks up on them like a predator, waiting to deliver the fatal blow when they realize that they’ve just made the same yukky face that they used to hate on their mothers’ faces.

Whew! Thank goodness I don’t have to deal with that! I know I’m saved from that fate because it’s been clear to me for a long time that I am the female incarnation of my father, right down to the way my feet twitch when I’m bored or relaxed. This realization came to me hard, like a Chuck Norris roundhouse kick, one day many years ago in grad school. END_OF_DOCUMENT_TOKEN_TO_BE_REPLACED

The case for bilingualism

I have spent my life around different languages. At home, though I heard mostly English, there was plenty of Portuguese being thrown around, especially when my parents were talking about us. When I wasn’t at home, I was usually found at my best friend’s house, whose parents were francophone Quebecois. Another friend down the road lived with her Ukranian grandparents. I befriended the foreign students, starting with the little Italian girl who started school with us in 2nd grade. After all this, it should come as no surprise that I have spent the last 20 years focusing my attention on languages and linguistics.

When my oldest sisters started school, they spoke almost no English. After some time of watching her children become confused by hearing English at school and Portuguese at home, my mother decided that the best thing for the family would be to switch the home language to English. She did not want her children to have difficulty at school, and believed that dealing with two languages would only serve as a distraction and source of confusion for them. She wanted to make it easier to navigate this new culture and society she and my father had chosen to live in. As a result, I was born into a family that had made the transition almost completely into English, with the exception of certain kitchen commands, food terms, random traditional expressions, and ‘colorful’ phrases one would say when very angry at a small girl who has just broken the sugar bowl. 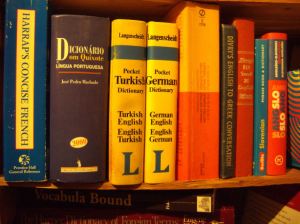 I get a bit enthusiastic about the dictionaries.

As a teenager and adult, I’ve had moderate success with second languages, but I longed for the same ease in another language as I have in English. I listen enviously to all the people I know who were lucky enough to have been brought up bilingual, and I wondered what prompted my mother – and many like her – to believe that maintaining her native language at home while her children learned English in school would have been a mistake. END_OF_DOCUMENT_TOKEN_TO_BE_REPLACED